On March 5, 2016, final attachment of both new boards was completed on the cockpit coaming. Not everything is completed, but they are strong and weather resistant. Here are some photos: 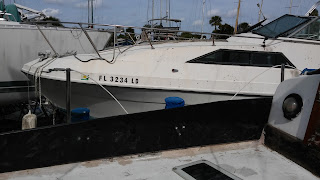 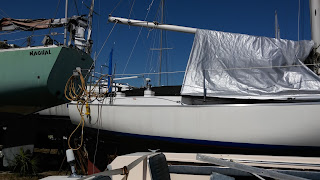 With the help of a neighbor and friend I was finally able to start the project of replacing the cockpit coamings. The boards deteriorated at an accelerated rate when I mistakenly sealed along the bottom of the boards a couple of years back. That only caused the moisture to build up below where water was getting behind them.
Having a friend along on the project made it easier to delve right in and tear out the old coamings. King Starboard polymer the same thickness as the wooden ones had already been ordered and cut, but not installed. One of my concerns before starting the replacement was that they might be structural in some way. That might have made the Starboard a bad choice. Fortunately, that was not the case. The area behind the boards was real rough on the port side, so some filling and smoothing was done by my friend after I did some removal of old rot. 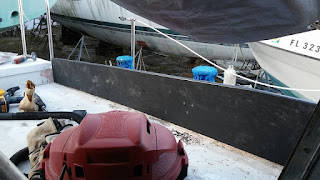 The Starboard may not be as pretty as wood, but it doesn't rot. As it turns out, when fasten into place it seems every bit as strong as the wooden ones.
Posted by Marsh at 9:52 PM No comments:

It is about time I made some progress! 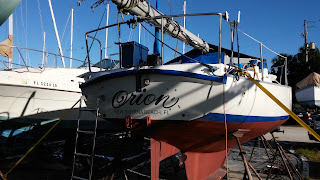 The hardware is back on the boat. 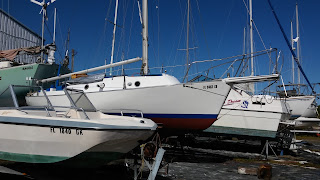 The mast is back up.

It looks like I need to rewrite Orion history on the website as it pertains to Irwin 10/4 history. Here is a link to a Good Old Boat article that explains it.
Good Old Boat Magazine: OCT. 2004 ISLAND PACKET INTERVIEW